By the author of the acclaimed bestsellers Benjamin Franklin and Steve Jobs, this is the definitive biography of Albert Einstein.

How did his mind work? What made him a genius? Isaacson’s biography shows how his scientific imagination sprang from the rebellious nature of his personality. His fascinating story is a testament to the connection between creativity and freedom.

Based on newly released personal letters of Einstein, this book explores how an imaginative, impertinent patent clerk—a struggling father in a difficult marriage who couldn’t get a teaching job or a doctorate—became the mind reader of the creator of the cosmos, the locksmith of the mysteries of the atom, and the universe. His success came from questioning conventional wisdom and marveling at mysteries that struck others as mundane. This led him to embrace a morality and politics based on respect for free minds, free spirits, and free individuals.

These traits are just as vital for this new century of globalization, in which our success will depend on our creativity, as they were for the beginning of the last century, when Einstein helped usher in the modern age.

As a scientist, Albert Einstein is undoubtedly the most epic among 20th-century thinkers. Albert Einstein as a man, however, has been a much harder portrait to paint, and what we know of him as a husband, father, and friend is fragmentary at best. With Einstein: His Life and Universe, Walter Isaacson (author of the bestselling biographies Benjamin Franklin and Kissinger) brings Einstein's experience of life, love, and intellectual discovery into brilliant focus. The book is the first biography to tackle Einstein's enormous volume of personal correspondence that heretofore had been sealed from the public, and it's hard to imagine another book that could do such a richly textured and complicated life as Einstein's the same thoughtful justice. Isaacson is a master of the form and this latest opus is at once arresting and wonderfully revelatory. --Anne Bartholomew 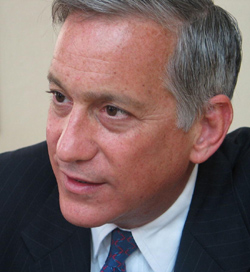 Amazon.com: What kind of scientific education did you have to give yourself to be able to understand and explain Einstein's ideas?

Isaacson: I've always loved science, and I had a group of great physicists--such as Brian Greene, Lawrence Krauss, and Murray Gell-Mann--who tutored me, helped me learn the physics, and checked various versions of my book. I also learned the tensor calculus underlying general relativity, but tried to avoid spending too much time on it in the book. I wanted to capture the imaginative beauty of Einstein's scientific leaps, but I hope folks who want to delve more deeply into the science will read Einstein books by such scientists as Abraham Pais, Jeremy Bernstein, Brian Greene, and others.

Amazon.com: That Einstein was a clerk in the Swiss Patent Office when he revolutionized our understanding of the physical world has often been treated as ironic or even absurd. But you argue that in many ways his time there fostered his discoveries. Could you explain?

Isaacson: I think he was lucky to be at the patent office rather than serving as an acolyte in the academy trying to please senior professors and teach the conventional wisdom. As a patent examiner, he got to visualize the physical realities underlying scientific concepts. He had a boss who told him to question every premise and assumption. And as Peter Galison shows inEinstein's Clocks, Poincare's Maps, many of the patent applications involved synchronizing clocks using signals that traveled at the speed of light. So with his office-mate Michele Besso as a sounding board, he was primed to make the leap to special relativity.

Amazon.com: That time in the patent office makes him sound far more like a practical scientist and tinkerer than the usual image of the wild-haired professor, and more like your previous biographical subject, the multitalented but eminently earthly Benjamin Franklin. Did you see connections between them?

Isaacson: I like writing about creativity, and that's what Franklin and Einstein shared. They also had great curiosity and imagination. But Franklin was a more practical man who was not very theoretical, and Einstein was the opposite in that regard.

Amazon.com: Of the many legends that have accumulated around Einstein, what did you find to be least true? Most true?

Isaacson: The least true legend is that he failed math as a schoolboy. He was actually great in math, because he could visualize equations. He knew they were nature's brushstrokes for painting her wonders. For example, he could look at Maxwell's equations and marvel at what it would be like to ride alongside a light wave, and he could look at Max Planck's equations about radiation and realize that Planck's constant meant that light was a particle as well as a wave. The most true legend is how rebellious and defiant of authority he was. You see it in his politics, his personal life, and his science.

Amazon.com: At Time and CNN and the Aspen Institute, you've worked with many of the leading thinkers and leaders of the day. Now that you've had the chance to get to know Einstein so well, did he remind you of anyone from our day who shares at least some of his remarkable qualities?

Isaacson: There are many creative scientists, most notably Stephen Hawking, who wrote the essay on Einstein as "Person of the Century" when I was editor of Time. In the world of technology, Steve Jobs has the same creative imagination and ability to think differently that distinguished Einstein, and Bill Gates has the same intellectual intensity. I wish I knew politicians who had the creativity and human instincts of Einstein, or for that matter the wise feel for our common values of Benjamin Franklin.

Acclaimed biographer Isaacson examines the remarkable life of "science's preeminent poster boy" in this lucid account (after 2003's Benjamin Franklin and 1992's Kissinger). Contrary to popular myth, the German-Jewish schoolboy Albert Einstein not only excelled in math, he mastered calculus before he was 15. Young Albert's dislike for rote learning, however, led him to compare his teachers to "drill sergeants." That antipathy was symptomatic of Einstein's love of individual and intellectual freedom, beliefs the author revisits as he relates his subject's life and work in the context of world and political events that shaped both, from WWI and II and their aftermath through the Cold War. Isaacson presents Einstein's research—his efforts to understand space and time, resulting in four extraordinary papers in 1905 that introduced the world to special relativity, and his later work on unified field theory—without equations and for the general reader. Isaacson focuses more on Einstein the man: charismatic and passionate, often careless about personal affairs; outspoken and unapologetic about his belief that no one should have to give up personal freedoms to support a state. Fifty years after his death, Isaacson reminds us why Einstein (1879–1955) remains one of the most celebrated figures of the 20th century. 500,000 firsr printing, 20-city author tour, first serial to Time; confirmed appearance onGood Morning America. (Apr.)
Copyright © Reed Business Information, a division of Reed Elsevier Inc. All rights reserved. --This text refers to the Hardcover edition.

235 of 245 people found the following review helpful
You Don't Have to be a Student of Physics to Enjoy this Book
By D. Buxman TOP 1000 REVIEWERVINE VOICE on April 15, 2007
Format: Hardcover Verified Purchase
In my experience, biographies of great scientists often leave the reader in a fog of technical complexity. While this book is not "Physics in One Simple Lesson," Walter Isaacson did a wonderful job of telling the story of the man and making the scientific aspects sufficiently understandable to be useful in grasping the magnitude of Einstein's intellect. This book is meticulously researched and sourced, yet written in a witty and entertaining way that makes reading it a pleasure. The central lesson that I was left with was the importance of independent thinking in any context. Einstein made it clear that conventional wisdom is often neither practical, nor wise. I was struck by his resiliance in his early years and his good humor in really tough times. I also appreciated the fact that the author was willing to examine all aspects of Eintein's personality, both favorable and unfavorable.
2 Comments  Was this review helpful to you?  YesNo
333 of 353 people found the following review helpful
A complex man gets his due in fascinating biography
By Wayne Klein HALL OF FAMETOP 100 REVIEWERVINE VOICE on April 11, 2007
Format: Hardcover
Walter Isaacson's biography of Einstein creates a fuller better rounded image of one of the finest minds of the 20th Century than many biographies of Einstein. Although it's not without its flaws, Issacson's book covers much of Einstein's life pointing out both his successes and flaws as both a person and physicist.

We learn that as a child Einstein suffered from what could be echolalia (which is where you mutter a phrase to yourself multiple times before saying it to others). Issacson notes both Einstein's debt to Hume, Planck and philosphers such as Kant in helping develop both his world view and his breakthroughs in science. To his credit Isaacson also points out that the man that came to embody the modern view of physics and became a hero who had feet of clay; Einstein gave up his daughter for adoption without ever seeing her and spent much of his time away from Mileva (who would eventually become his first wife) while she was pregnant for a variety of reasons some understandable some not. The young Einstein was brash,egotistic and obnoxious (or you could call him overly confident) often pointing out flaws in papers by the very professors he was seeking jobs from. He also charts Einstein's difficult path to his professorship including his stint working in the Swiss patent office.

Isaacson does cover Einstein's support for the development of the atomic bomb (although this is a relatively small section of the biography) and mentions that Einstein later regreted his support and the bombing that occurred in Japan during World War II. When Einstein came up with his famous equation, he never imagined it would help pave the way for for mass destruction.Read more ›