Preserve your favorite foods through every season with Real Food Fermentation. Control your own ingredients, techniques, and additives. Learn a practical food-preparation skill you’ll use again and again. And express yourself by making something unique and whole.

—All the basics: the process, the tools, and how to get started

—A guide to choosing the right ingredients

—Sauerkraut and beyond—how to ferment vegetables, including slaw-style, pickles, and kimchi

—How to ferment dairy into yogurt, kefir, crème fraîche, and butter

—How to ferment fruits, from lemons to tomatoes, and how to serve them

—How to ferment your own beverages, including mead, kombucha, vinegar, and ginger ale

—A primer on fermented meat, fish, soy, bread, and more

—Everything you need to know about why the recipes work, why they are safe, what to do if they go wrong, and how to modify them to suit your taste 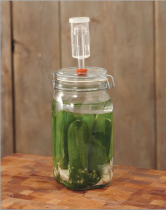 Pickled cucumbers, or simply “pickles,” are a quintessential fermented food. The ﬁrst record of pickles comes from ancient Mesopotamia. Such diverse historical ﬁgures as Aristotle, Julius Caesar, Shakespeare, Amerigo Vespucci, and Thomas Jefferson are reported to have been fond of pickles. Indeed, Amerigo Vespucci, after whom America was named, was a pickle vendor before he became a world explorer. Pickles play a signiﬁcant role in the food culture of many countries, from North America through Europe and into the Middle East.

1. ) If your cucumbers are at all soft, if you bought them at the store, and/or if you suspect that they might have been picked a while ago, you can perk them up by soaking them in ice water. 2. ) Trim the blossom ends off your cucumbers. These ends contain enzymes that can contribute to “hollow pickle syndrome. ” 3. ) Combine the chlorine-free water and salt in the pitcher, and add any starter or vinegar, if using. 4. ) Place the seasonings and tannin providers at the bottom of the jar or crock, followed by the cucumbers. 5. ) Pour the brine into the crock. 6. ) Weight everything down in such a way that it stays submerged. 7. ) If needed, cover the top of the jar or crock with the cloth, and affix the cloth with the rubber band. 8. ) Store at cool room temperature. Every day after the second or third, pull out a pickle, cut off a piece with a clean knife, and taste it. When the pickles are pleasantly sour but still crunchy, they are done. Move them to a cool place (like the refrigerator) immediately. Yield: 3–4 pounds (1.5–2 kg), Prep time: 10 minutes, Total time: 3 days–2 weeks

Knife; Cutting board (wood is ideal); 1-gallon (4-L) pitcher; ½-gallon (2-L) mason jar, a Pickl-It, a Harsch crock, or a plain glazed (lead-free) ceramic crock; Something to hold the cucumbers under the brine, like a small clean plate or saucer that ﬁts inside the jar or crock (if needed); Clean dishtowel or cloth to cover the top of the jar or crock along with a rubber band (if needed).

Alex Lewin, a graduate of Harvard, the Cambridge School of Culinary Arts, and the Institute for Integrative Nutrition, seeks to create a healthier and tastier world by spreading the word about fermentation and real food. He teaches fermentation classes and workshops and serves on the board of the Boston Public Market Association, working to create a year-round indoor market selling local food. He lives in Boston and San Francisco. To learn more about this book, visit RealFoodFermentation.com.

362 of 380 people found the following review helpful
Limited Scope, Many Photographs, May Entice The Ferment-Wary
By Brandon Curtis on June 9, 2012
Format: Paperback Verified Purchase
I had not heard of this author before, so I did a bit of background research to find out more about him.

Alex Lewin is a software engineer, health coach, and 'real food' advocate who lives in Boston and San Francisco. He has a degree from Harvard in mathematics, has completed the Professional Chef Program at the Cambridge School of Culinary Arts, and has received training as a health coach at the Institute for Integrative Nutrition. He's currently working for the crowdsourced video broadcasting startups Justin.tv and Twitch.tv and serving as vice president of the 501(c)(3) nonprofit Boston Public Market Association. Since 2009, he has run a 'real food' blog (feedmelikeyoumeanit dot com) and led workshops on food preservation. In addition to his blog, he is active on LinkedIn, Twitter, and Facebook; a Google search turns up advertisements for his workshops, articles highlighting his volunteer activities and food advocacy, and a few mentions of his sustainable technology hedge fund, Atlas Capital Investments, in which he is a partner along withSolar Revolution author Travis Bradford. In his blog bio, he lists Vandana Shiva, Kurt Vonnegut, Anthony Bourdain, Andrew Weil, Barry Sears, Dr. Weston A. Price, Sally Fallon, and Sandor Katz as important influences. He blacked out his blog in protest of SOPA and professes a preference for free and open-source software, so he's obviously got his priorities in order.

Granted, you're buying a copy of Lewin's book and not a copy of Lewin himself. Hopefully, though, this information will help you understand this book - Lewin's first - a little better.

The Introduction and Chapter 1 cover the basic concepts of food preservation and fermentation, ending with a reasonably detailed overview of the kitchen equipment you will most likely need to create this book's recipes.

Lewin cares deeply where the food he's fermenting has come from. Chapter 2 ("Know Your Ingredients," 20 pages) is entirely devoted to the issue of Real Food, covering topics including food freshness and buying local. Instead of making a blanket declaration that organic produce is always superior, Lewin advocates that consumers open a dialog with food producers to really understand where their food comes from. While this might be possible in a farmer's market, he concedes that it is not always practical. I like the vision he has for a better world, but I also appreciate that he is realistic.

The recipes themselves fill out the remaining 110 pages. Chapters are devoted to sauerkraut, vegetables, dairy, fruits, beverages, and meat. Unlike Sandor Katz, Lewin makes no attempt to be comprehensive: beer, wine, soy (soy sauce, tempeh, natto, and miso), and even bread receive only a few short words of description and do not include recipes. Strategically, I think this makes sense - Wild Fermentation and The Art of Fermentation already exist, and there is no point in duplicating them. Instead, Lewin has presented a small number of very well tested recipes in such a way that even the most inexperienced and conservative in the kitchen might be enticed to try them out.

In contrast to the often rather vague 'recipes' in Katz' seminal works, these are laid out much more like they would be in a traditional cookbook: each recipe includes a quantitative ingredient list followed by very explicit instructions and many, many photographs.

Ahhh, the photographs! - they are rather gratuitous. In the sauerkraut recipe, for instance, an entire page is devoted to six full-color photographs and 100 words illustrating how to chop a bell pepper. One half of the surface area of pages 70-71 are images of, variously: water being poured into a Mason jar; a root vegetable being coined; salt pouring from a bowl into some water; and a food processor. While some of these images - for instance, an illustration on page 60 entitled 'The Evolution of Sauerkraut' that shows how the colors change as fermentation progresses - are quite helpful, nine out of every ten serve more to titillate than to educate. This is food porn, and in his blog Lewin is unapologetic:

"There are other fermentation books out there, including some new ones, but to be honest, mine is the prettiest by far..."

While 'The Art of Fermentation' is laid out more like a textbook, 'Real Food Fermentation' has a very modern (love it or hate it) layout. The margins and line spacing are broad, and large full-color photographs fill about one out of every three pages. While it has about the same number of pages as 'Wild Fermentation', the open layout fits significantly less text per page - I received the book this morning and read it straight through in a day. Those experimenting with fermentation for the first time, however, may find the pictures to be worth a thousand words.

I will update this review with more information about the recipes once I have had an opportunity to try them. The Carolina slaw, pico de gallo, and plum chutney look especially good, so I'm setting up this weekend to ferment them exactly as written.

If you're brand new to fermentation, consider purchasing this book and Wild Fermentation: The Flavor, Nutrition, and Craft of Live-Culture Foods to complement eachother.

If you want an encyclopedic account of food fermentation's history around the world and aren't as interested in recipes, The Art of Fermentation: An In-Depth Exploration of Essential Concepts and Processes from Around the World is your book.

If you dislike Katz' work for its frequent philosphical wanderings and lack of explicit instructions, try this book instead.

If you already have, use, and love Wild Fermentation and Art of Fermentation, you will probably not find much new information in this book. It will, however, be a useful coffee table trap for luring sometimes-reticent friends and family into your art.
16 Comments  Was this review helpful to you?  YesNo
78 of 82 people found the following review helpful
5 stars for total beginners
By VegGirl on October 26, 2012
Format: Paperback Verified Purchase
I really like this book and I will definitely recommend it to ANYONE who is just getting started in the world of fermentation. I do wish I had realized that it was only basics before I had purchased, but nonetheless, there are some good tips and tricks even for people with a bit more experience.
On the whole, if you are the type that does better with specifics, if you find the Katz books too open to work from, you will enjoy this. If you are an experimenter, you'll probably feel like I do. It's pretty, the author knows his business, but there isn't a whole lot of exciting and new stuff to learn here.